The switches in a PTP network should have PTP Transparent Clock support. Time synchronization packets forwarded through a switch with PTP Transparent Clock support will not suffer from variable switch latency. The switches in the network should have Slave Clock support, meaning they are synchronized with the PTP Slave Clock end devices to the same Grand Master Clock. A switch on the edge of the network can then provide non-PTP interfaces with time synchronization output signals such as IRIG-B (DC and AM) or GPS emulation (i.e. 1PPS and NMEA telegrams) in order to distribute time to non-PTP end devices 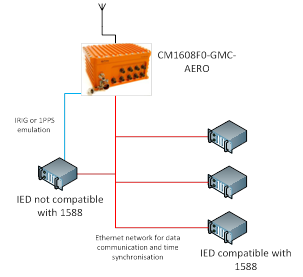